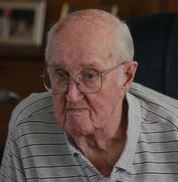 He formerly was employed for King & Roberts Wholesale, Inc. of Charlottesville, Virginia for 37 years, working for the late Corbette King and Bob Roberts. Chubby retired from King & Roberts as the general manager in 1983 and was rewarded for the many loyal years of service by a company sponsored trip to Hawaii. He remained a lifelong resident of Charlottesville and took great pride in his community.

Chubby was a member of Widow's Sons' Masonic Lodge #60 for 57 years; the American Legion Post #74 for 59 years; the Falcon Club as a charter and life member; the Elks Lodge #389 as a life member, the Veterans of Foreign Wars (VFW) and life member of the Disabled American Veterans. Chubby was a highly decorated World War II veteran in the U.S. Army having participated in the first wave landing at Omaha Beach, Dog White Sector, during the D-Day Allied Invasion of Normandy, France on June 6, 1944. Prior to the war, Chubby was a member of the Monticello National Guard having joined in February, 1939, and prior to war formerly being declared, his unit was federalized into the U.S. Army in February, 1941, where he was a Tech Sergeant in the famed "Blue & Gray" 29th Division, 116th Regiment, Company K. He was awarded the Distinguished Service Cross for gallantry in action; the Silver Star for bravery; the Bronze Star with Oak Leaf Cluster; the Purple Heart with two Oak Leaf Clusters for being wounded in action three times; the French Croix-de-Guerre; the Combat Infantryman Badge - 1st Award; the Good Conduct Medal; the Pre-Pearl Harbor Ribbon; the European-African-Middle Eastern Campaign Medal with Bronze Star Attachment (Quadruple) and Arrowhead; Army of Occupation Medal and Germany Clasp; American Defense Service Medal; American Campaign Medal; World War II Victory Medal; Expert Infantryman Badge; Honorable Service Lapel Button -WW Il; Sharpshooter Badge and Rifle Bar; Presidential Unit Citation and Oak Leaf Cluster and a battlefield commission to the rank of Second Lieutenant. He received the rare Virginia Distinguished Service Award in 1994 for his exploits and heroics in World War II.

He always grieved for his Army buddies who did not survive the war, and was proud to attend the 55th anniversary in 1999 in France commemorating the D-Day Invasion to represent his fallen comrades and his Country, and while there, he was awarded the French Freedom Medal. Also, at the American Battle Monuments Cemetery in Normandy, he laid a wreath on the grave of his fallen Company K comrade, T/Sgt. Frank D. Peregoy, who posthumously had been awarded the Congressional Medal of Honor for his bravery exhibited in action on June 8, 1944.

While stationed in England, and prior to the D-Day Invasion, he was very proud of being a starting outfielder/first baseman on the "Plymouth Yankees" 1943 European Theater of Operations (ETO) military championship baseball team, playing with and against many professionals, and of clubbing 17 home runs in 33 undefeated games against some quality pitching. On July 13, 2009 he was very proud to be escorted by Peter Stoudt of Charlottesville to the Baseball Hall of Fame in Cooperstown, New York, and accompanied by fellow "Plymouth Yankees" teammate Joe Gubemot of Shamokin, Pennsylvania, who played shortstop, and to be video interviewed and archived as the last two surviving members of the 1943 ETO championship team.

On July 4, 2008, and as a highly decorated veteran of World War II, Chubby was honored to be selected to lead the Pledge of Allegiance for all of those in attendance at the 461h Annual Independence Day Celebration and Naturalization Ceremony at Monticello, which was attended by then President George W. Bush and Governor Timothy M. Kaine, along with many other local, state and national dignitaries. This ceremony swore-in 75 people from 30 different countries as American citizens. Again, on July 4, 2009, he was proud to do the same at the 47th Ceremony at Monticello, which was attended by Congressman Tom Perriello. On February 15, 2012, Chubby traveled to the French Embassy in Washington, D.C. to receive the French Legion of Honor medal (Chevalier), France's highest decoration. Then, on February 20, 2012 at the American Legion Post 74 in Shadwell, Virginia, a local celebration was held in recognition of Chubby being awarded the French Legion of Honor medal {Chevalier), and which was attended by about 150 people. At this time Congressman Robert Hurt presented Chubby with an American flag which had been flown over the U.S. Capitol on February 15, 2012, in his honor. In addition, Chubby was presented with a Commonwealth of Virginia flag by Command Sergeant Major Green on behalf of Governor Bob McDonnell, which also had been flown over the State Capitol in Richmond, Virginia in his honor.

Over the last several years he was a contacted by many individuals who were doing research on World War II and/or the D-Day Invasion, and he was honored to go to various schools to speak to the students about his experiences in World War II. His clarity of memory about the war going back some 70 years always was a surprise to those with whom he spoke. Chubby loved sports of all kinds, particularly baseball and fast pitch softball. He was involved with the local little league, and managed several championship junior league and American Legion baseball teams, and is remembered for his home run prowess as a fast pitch softball player at Mcintire Park. On October 21, 2010, Chubby was honored by the Charlottesville City Council by having a dedication ceremony with the naming of the ball fields at the Mcintire Softball Complex after him, and the placement of two signs and a commemorative plaque.

Also, he loved working in his vegetable garden for many years, planting flower beds around the house in which he had lived since 1946, and keeping his yard in top shape, and for decorating his house with many lights during Christmas. When he physically no longer could work a garden with his brother, Hollis, he always appreciated it when he would receive various vegetables from the gardens of his brothers, Ralph and Hollis, and occasionally some delicious apples.

Chubby was a very faithful and longtime member of the Cherry Avenue Christian Church in Charlottesville, Virginia, and belonged to the Men's Bible School Class. He had many Christian friends, whom he cherished deeply. Chubby was a caring, devoted and loving provider, husband, father, grandfather, great-grandfather, role model and friend, who took much joy in his whole family, and he will be sorely missed by all. He was proud to be a Virginian, and a native of Charlottesville. He easily could be described as a patriotic American, and he exemplified Tom Brokaw's book titled, America's Greatest Generation, those who fought in and were triumphant in World War II by defeating Naziism and fascism, and returned home to continue their winning ways in civilian life, thereby cementing America's role as the leader of the free world and a beacon of democracy for future generations.

Special thanks go out to Dr. Gordon Morris, Dr. Chris Friend, Dr. Nguyen Dong, Dr. Karen Starr and the late Dr. John Shrum for taking care of Chubby's medical needs. In addition, the family is grateful to the staff of The Laurels, and particularly his physical therapist there, Ralph Hedger, RoseWood Village - Greenbrier, and of the Martha Jefferson Hospital. Also, thanks to friends Sonny Payne, Rodney Southall, Chip Bickers, Jimmy French, Ron Fisher, Hobart Addington, and many others for chauferring him to various meetings and appointments. Also, a special appreciation to Peter Stoudt for his many meetings with Chubby, and taking him on various excursions doing research for a book. Also, thanks to Ray and Edna Bishop for doing cleaning and housekeeping duties at his house, and to his neighbors, and others, who displayed many acts of kindness by putting his newspaper on the front porch, and shoveling snow from his walkway. Lastly, our appreciation is extended to Ed Shifflett, Chubby's barber for many years, and who went to cut his hair at The Laurels and Rosewood Village - Greenbrier. A special word of thanks goes to various members of the Monticello National Guard who did many tasks at Chubby's home, such as raking leaves, trimming hedges, cleaning out clogged gutters, etc. Also, their keen interest in listening to Chubby talk about his experiences in World War II, and their willingness to take him on various trips of a military nature gave him modern day relevance, and provided him with many hours of joyful interaction. Also, the family appreciates the efforts of Mary Ellen Wooten, who not only got Chubby re-connected with the Monticello National Guard, but for her many acts of kindness and consideration. Our thanks also go out to the volunteers of Meals-on-Wheels who delivered many tasty meals to Chubby's front door. In addition, Chubby always looked forward to Friday morning visits with Sonny Payne and munching on sausage biscuits and doughnut holes, and enjoying his company.

In lieu of flowers, you may make a memorial donation to the Cherry Avenue Christian Church, and/or the Charlottesville-Albemarle Rescue Squad and/or the American Legion Post #74; and/or the National D-Day Memorial in Bedford County, Virginia and/or Meals-on-Wheels. Condolences may be sent to the family at www.hillandwood.com